What are you seeing with the pace of board sales in your neck of the woods?

Are prices coming down? Inventories building up?

I haven't bought in months, and last sold a couple months ago
B

Board sales looks like they slowed! Curious what shops are seeing?

I would guess that sales will pick up again after the holidays...

Pretty quiet in San diego lately... I usually message people or make offers on boards regularly. -- I've just mostly been seeing junk or boards that are ridiculously over priced.

The board hoarders will be broke soon ...or low on weed and booze... and then we'll be ready.

We are experiencing that problem with quad fish in New England.
Traumatizing.

I have been seeing a Massive slow down in both the board and bicycle market. The Craigslist marquee has been showing the same films for quite some time and only additions have been some awful independent films or ones from the 90's that went straight to VHS.
Right now everyone who wants a board, has a board. And many of the novices have discovered they don't really need to upgrade from their foam tops. They're getting waves and having fun.

One last thing and it's about being Here for a bunch of years?
I have a PHD in surfboards - variety, design, function, application- compared to a Lot of guys who have been doing this their whole life. I'm the guy that has always been surfing- "Those weird boards" bonzers, mini simms, twinzers, etc. Just had this conversation with @JMJackFish. The lack of knowledge, due not to stupidity but lack of Exploration and immersion in ones favorite interest is a very palpable void when brought up in conversation with people outside this place.

I would say it’s all about what is being sold and whether or not your disposable income is still flush. The inventory in New England that is publicly advertised is never great as sales generally take place behind closed doors.
J

I can say that the used board market in the mid atlantic has undoubtedly slowed. During covid the used board market went crazy and so did the prices. Now the prices are still a little higher on used boards but except for the ultra desirable boards or super deals, boards aren't selling. I've also noticed the shops all seem to have some black Friday board deals. So I guess the shops are noticing a slowing as well.

I'm still building ahead...... because I can, but right now I have a dozen custom orders from my regulars and a few new customer inquiries.
By comparison, the glass shop is empty as other shapers are pretty dead, well, they are dead in the water.

The holidays is a predictable slow down, so I'm not putting much stock into this being "the end of the world as we know it..."

P.S. I was gonna post a photo, but the attach files facility is shutting me out again saying photo file "not as expected"...... so here's Frame #1 of Derek Thomas in a recent cutback sequence. 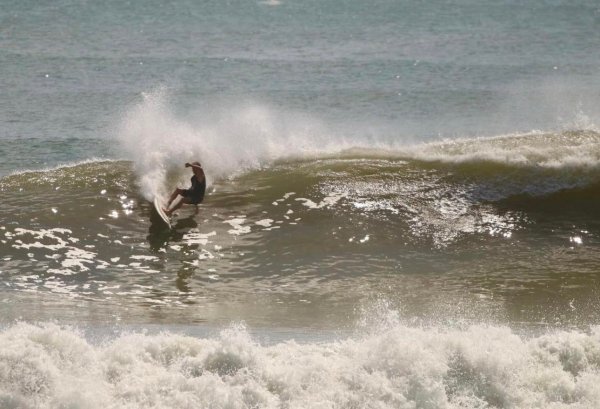 Too soon to tell. You would think that after that ridiculous Covid spending spree, everyone would be all set. Unfortunately, in the crazy world, nothing really makes sense to me anymore so I can't really predict.

In terms of pricing, I doubt we will see the costs of new boards come back down. Unfortunately, I think the higher costs in just about every industry are here to stay.
You must log in or register to reply here.