It was the place I'd go in my head during homeroom lol. I was in Campus Life in highschool, they owned that house on the bluff at Garbage. I spent the month of August there in 1980.

Chilly Willy said:
One of my main local breaks here in NJ is Casino Pier -- most people know it as the spot where the roller coaster fell into the water during Hurricane Sandy. The spot is steeped in local history, with a recent film called "A Life Outside" being made about the guys that pioneered the spot. Cool to watch it, though I'm glad I wasn't surfing there back during the early years. Lots of interesting stuff there, including a pro surf contest in 1988 in which the prize money mysteriously disappeared before the end of the contest. The pier first entered my sphere of consciousness when I was a grom and the local paper ran a fluffy article about the top 10 surf spots in NJ -- Northside was one of those spots and very close to home, so I was eyeballing it any chance I got with hopes of eventually surfing there. I didn't even try paddling out there for another 12 years after that, making sure my skills were up to par first. (In retrospect probably unnecessary to wait that long, but it seemed respectful and maybe more people should do that.) It used to be an amazing spot -- actually more like two spots in one -- where you could walk through the dark forest of pilings under the pier (picture the gloriously noxious smell of creosote mixed with sea water) to surf the other side.

The history continues to evolve -- it is absolutely nothing like it used to be ever since 2012 when half of the pier was washed away as a result of Hurricane Sandy (and yes, the roller coaster thing). I have a buddy who didn't start surfing there until after Sandy, so I now get to play the part of the old guy telling the history. I always find myself waxing nostalgic, telling him about how great it used to be, which piling you would have wanted to line up with, how Southside used to suck up next to the pilings like weird a little wave machine, and how he "shoulda been there yesterday".

The pier itself always seemed intertwined with the surf spots alongside it. There was the manic soundtrack of whatever music the DJ was playing on the Himalaya. When you were in the lineup at Northside (pre-Sandy), kids going up the hill on the roller coaster used to look down at us surfing and nervously/excitedly wave. The history of the pier itself is just as interesting to me as the surf spots. All the different roller coasters, haunted houses, and rusty rides that have come and gone over the years. My own experiences include going to Water Works across the street when I was elementary school... or later in my high school years, working my miserable first job rounding up shopping carts at Grand Union with the primary goal of scraping up enough skimpy pay to buy enough tickets to get my girlfriend and myself rides on the Zipper or the Jet Star. For me, surfing that spot is all of that rolled into one experience -- interesting local surf history, the stoke of a grom hoping to someday surf there, fun summer nights, and of course some pretty magical sessions over the years.
Click to expand...

Tijuana Sloughs seem worthy of mention. THE big wave spot in California before Mavericks was discovered. Great write-up for the curious.

Thanks for that. Been fascinated by that spot ever since Surfing California and especially Surfing Guide to Southern California. Anybody here surf there? 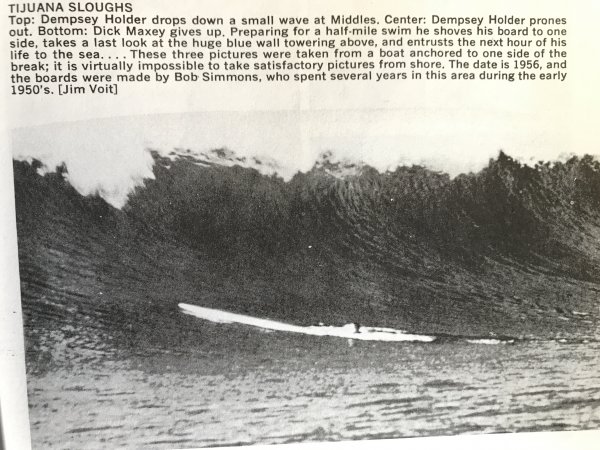 Used to, water is really bad now. IB is a gem

tuskedbeast said:
Thanks for that. Been fascinated by that spot ever since Surfing California and especially Surfing Guide to Southern California. Anybody here surf there?
Click to expand...

Never surfed there. during my short time in IB surfed the nearby tijuana estuary a lot. Definitely had an aura about it from the locs.

PeakMaster said:
I used to surf the pier routinely in the early-mid 70s. It was a great break...especially in winter with the Uniform of the Day being my O'Neill Supersuit. Some serious local talent too. Vito De Franza, Kevin Casey, etc... In Spring there weren't many other places like it. Left barrels off the pier while you smelled sausage, peppers and onions cooking from the boards. I lived oceanfront one winter in real luxury...a winter rental studio at Joey Harrison's Surf Club apartments. Surfed the pier almost every swell that winter.
It is a historical break for NJ. Grog got serious contests with top notch guys from California, Hawaii and Australia competing with local NJ guys back then. In effect, putting NJ on the surfing map. I would say it ranks # 1 as a historical break in NJ.
Click to expand...

That's awesome. Some of those guys from the original crew are still surfing there. Pretty sure I spotted Grog walking his dog on the beach there this summer. It's a pretty unique place to surf if nothing else -- let's say it's not exactly where you'd want to go in the summer if you want a peaceful session in silence and solitude. Those rentals must be a rite of passage. I never did it myself but know a bunch of guys who have rented on the Seaside/Ortley border over the years with the goal of surfing their brains out.

Munster said:
I lived on the USIU Cal Western campus circa 1971. Surfed Ab, South Ab ,New Break , Casims, Pink house ,thirty threes and dolphin tanks . Jeff Ching was the dominant steve list fish rider at new break in that era. Met Liss the previous year at UCSB, where he and his bud were glassing boards during a weekend in one of the dorm study halls.
Click to expand...

Two friends from NJ went to school there then. I flew out and slept on their dorm room floor surfing some of those breaks for a week. Waking up early checking the surf from a bathroom window.
M

SeniorGrom said:
Two friends from NJ went to school there then. I flew out and slept on their dorm room floor surfing some of those breaks for a week. Waking up early checking the surf from a bathroom window.
Click to expand...

If they lived in the Epsilon dorm which overlooks Ab , and they were there in the early 70s , I knew them. The NJ surfs that I recall both had long hair and one had a last name of Weed.
L

SMUKES said:
It was the place I'd go in my head during homeroom lol. I was in Campus Life in highschool, they owned that house on the bluff at Garbage. I spent the month of August there in 1980.
Click to expand...