The moon landing was before my time, but my dad relates the story of being in Vietnam and watching the moon landing on a little portable TV that he bought himself over there. A few months later, one of those USO tours came to Lai Khe with Bob Hope and his special guest, Neil Armstrong, who he had just watched walk on the moon. That story always blows my mind.

Related: I took this picture of the moon last night through a telescope. It was unusually colorful (if there are any space nerds out there, maybe someone can explain why). It didn't dawn on me that it was the moon landing anniversary, but it was neat realizing it after the fact that I was looking at it 52 years later to the day. 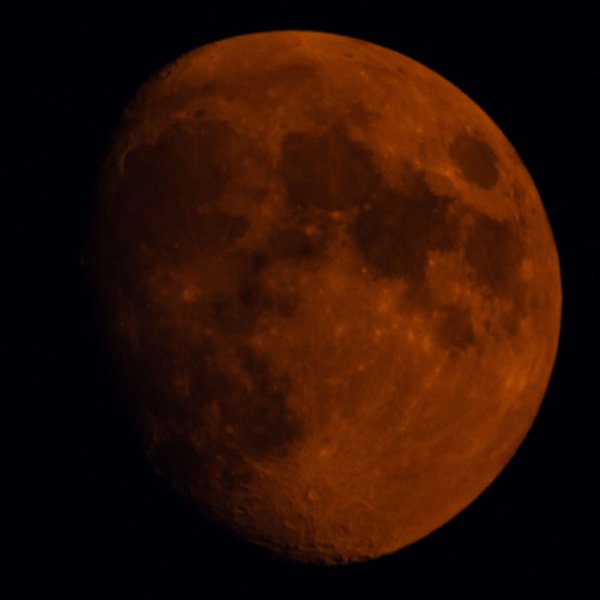 Chilly Willy said:
Related: I took this picture of the moon last night through a telescope. It was unusually colorful (if there are any space nerds out there, maybe someone can explain why)
Click to expand...

Not a space nerd but becoming a inveterate wildfire experiencer- I think you're seeing smoke from the far west US.

I was 7 and pulled out of bed at dawn to watch on our Sears B&W (those stoner pros were especially naughty if they were already high. Was it mid morning on the East coast?).

My dad was a chemical geologist working in Aerospace too, and conducted analysis of the rocks the astronauts brought back to earth. He brought home a tiny grain of moondust which he kept in a glassine envelope. Of course it got lost over the years.

I wasn’t alive then but have heard stories. I actually enjoy hearing that it was all Hollywood faked. Some of the crazy flat earthers come up with some funny stuff.
I was alive for Challenger. I was only 6. It was probably my first experience with watching something historic. I will never forget it and hope to never see it again.
Safe travels everyone.

SeniorGrom said:
Some of THEM were in ‘altered states’. Can’t forget that one.
Click to expand...

A lot of us were "altered statesmen" back then to a certain degree.

Niau said:
Friends, fresh poi, Primo beer, something lysergic and a party on Maui. I recall the moon appeared full and luminous.
Click to expand...

Maui, same. But I don't think I was even aware of the hubbub. Might have been the acid, booze, bud & snatch.

SharkB8 said:
I was alive for Challenger. I was only 6. It was probably my first experience with watching something historic. I will never forget it and hope to never see it again.
Click to expand...

Same -- though I was 8 and we had a snow day that day, so schools were closed. I was outside playing with GI Joes in the snow and came in for a break, where my sister and mom were watching TV and told me what had just happened. I definitely remember looking over at the TV and seeing the smoke trails. It's really weird how you can remember every detail about those kinds of days, regardless of whether it's good historic or bad historic.

I was 20 and working for the Monmouth County NJ Mosquito Commission. I was at work in the western part of the county and I think I saw the replay that night.

Remember it well.
Entire family gathered around the big b/w 19" Zenith and sweating on the plastic couch covers my mom insisted on puting on all the furniture.
Was beyond exiting for this kid.