How to loosen a quad setup?

Niau said:
Switch to small upright rears. Grab some cheap composition units and cut/grind/sand ‘em down til you’re happy. I prefer same cant as fronts, but that’s not common.
Click to expand...

Is your fin set flat side foiled or double?

I had a 6'8" egg that I placed the quad set up with the hanalei fin setup. They were the old Lokbox fins so you could adjust them 1/8" either way up or down. In the standard middle position, they made the board really tracky and hard to turn. Pushed them together in the tightest cluster I could and they were magic. Rears were 80/20 foil and fronts had the concave inner foil.

Ride a twin fin. Or get really small fins. Play around with the trailing fins

My honest answer here was gonna be "get a thruster"... Quads track, its what makes them exciting / fast feeling. Most average surfers will probably get more out of surfing back-footed on a thruster. They are "loose" yet stable, sit mid-face naturally, stall well and go to vert and come back down better. Sure, you gotta pump them but hey. For 40 years I've listened to people wanting to loosen up their trucks, screw down the kingpin of your Trackers and carve over the death box on your quad.

Quads:
The Angle of Leverage changes depending upon how close to center the rear set of fins are & the spread of the cluster.

A wider fin spread demands the rear set to move closer to center to provide release..... super tricky out @ the rail. Big mistake.

The quad set up out further to rail is very fast down the line, more so than the aforementioned because of the leverage angle closer along the rail. I personally like
them closer to rail for this reason but tighten the cluster to remove them over tracking/sticking on cutbacks. Many moons ago McKee and I corresponded and BM
told me he actually preferred them like the setup I was doing but adjusted them to the wider spread, closer to center config to be more user friendly for Joe Average
surfer dudes.

Another consideration other than smaller rear fins providing release, or have upright pivot planshapes is Cant, Toe In & Foil.

Rear Fin Set:
50/50 Foil = loosest
Flat Foil on all 4 fins = most drive/leverage - sometimes preferred by surfers needing more down the line drive exp. backside or power surfers pushing hard thru turns.
Elipticals 80/20, 70/30, 60/40 = varying degrees of looseness in relation to the above.

There are all kinds of ways to screw up a quad. There are compromises like increasing back fin size for the rear fins because the placement is too close to center
slowing down the board. The biggest bummer to overcome is if the rear set of fins are too close to rail with too wide a spread. Safe spreads for rear sets with trailing edges 1-1/2" to 1-3/4" in from rail is 1-3/4" to 2-1/4" leading edge of rear fins to trailing edge of front fins........ the wider spread being for longer boards.

Basically the closer to rail TIGHT IS RIGHT. 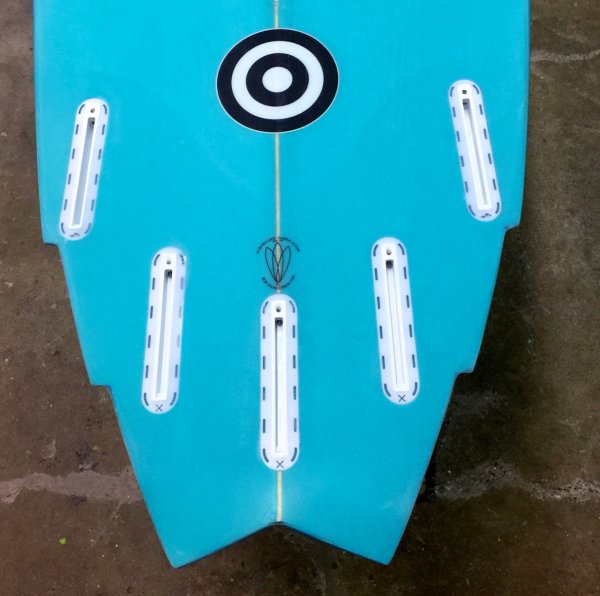 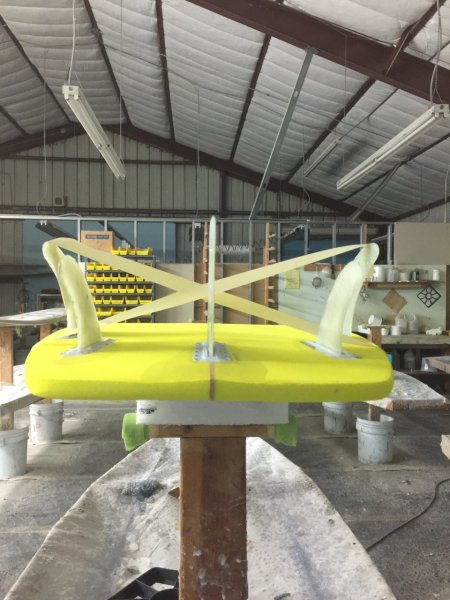 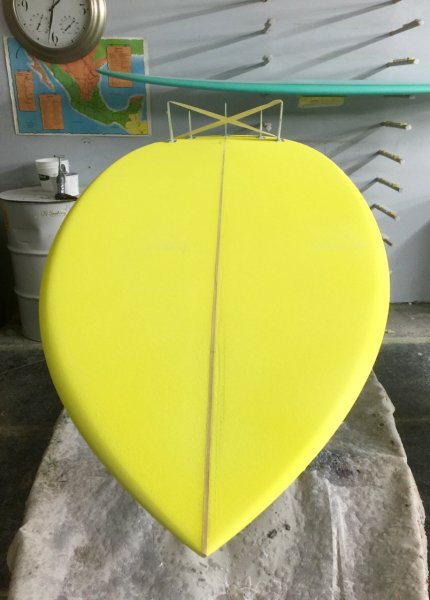 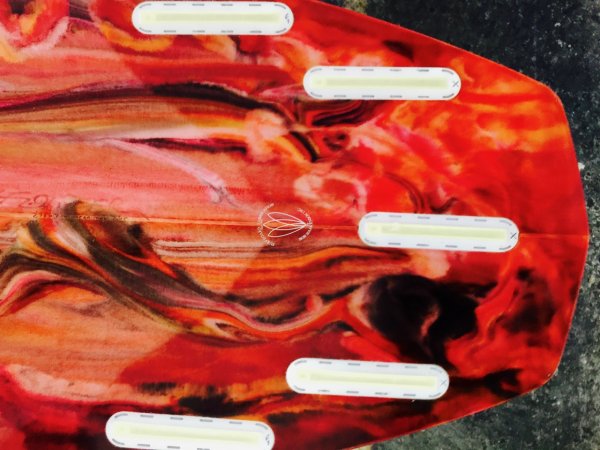 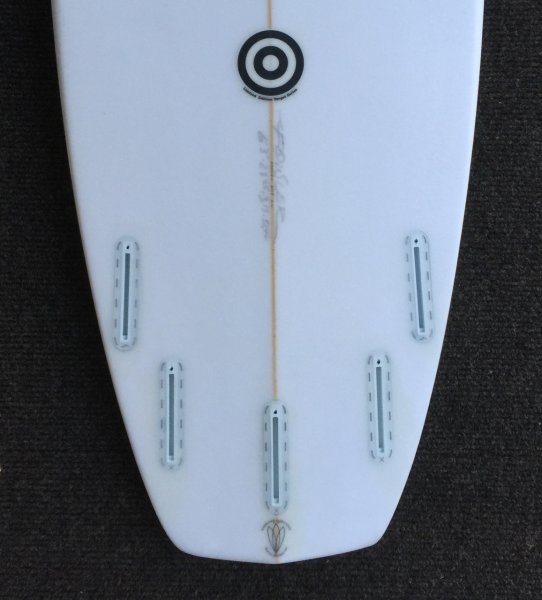 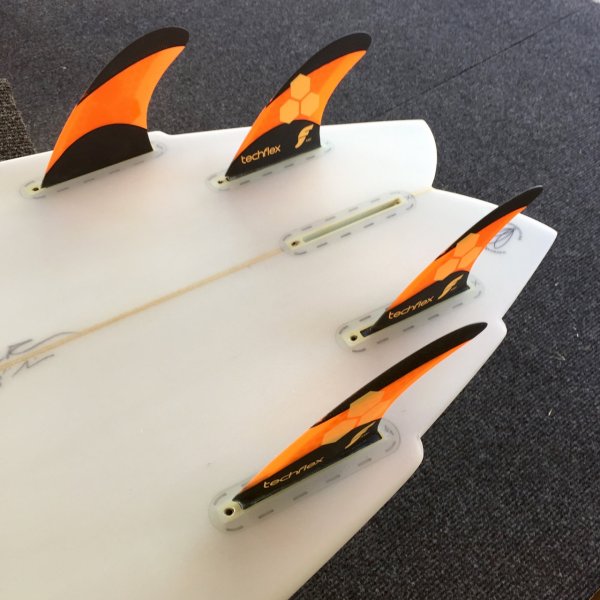 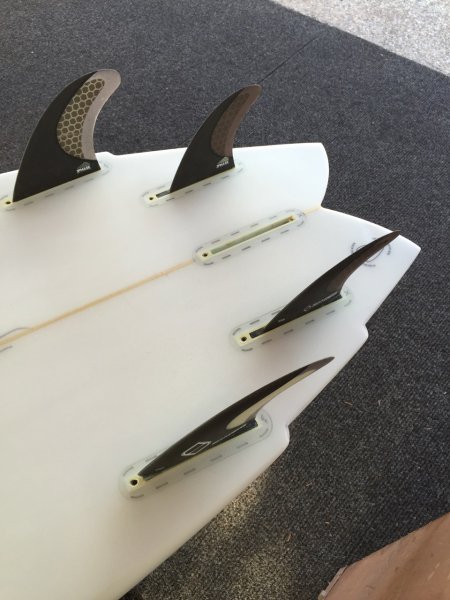 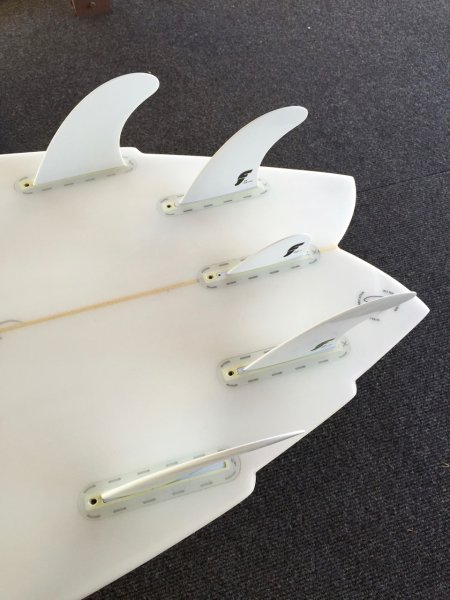 Sincere thanks for sharing your quad knowledge & experiences!!

Ricksurfin said:
Lots of info here. Scroll down under notes and it breaks down differences of fin sizes.

This is where future fins suck. I try and find older fiberglass front fins and cut the base down to fit 1/2 boxes. Next quad might have FCS boxes. I like bigger rear fins with flat foil until the surf gets some power. Take a look at the future controller set. I’ve used the rear set before and liked them. Quads the forever test platform
You must log in or register to reply here.
Share:
Facebook Twitter Reddit Pinterest Tumblr WhatsApp Email Share Link