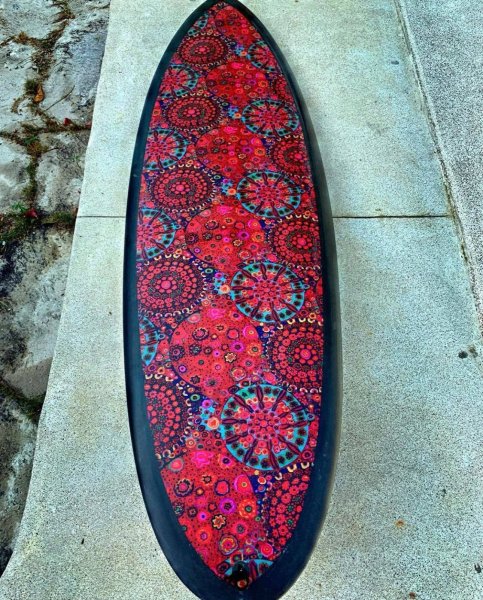 New thread getting away from that V Machine stuff because........... this is a "BFDE" not the 'other board' that I've become too infamously known for. Never considered myself a "One Trick Pony" which BTW, the ponies I've met in my life are full of tricks and sometimes downright nasty.

So with that, let's move on. The Double Ender isn't exactly the same dims at Nose & Tail, but the Planshape is close enough to award the name. The outline is a Parallel curve so to speak which provides rail length and release at the same time. Subtle Single to Double Concave - nothing extreme. These boards are what I consider very "Neutral". It's interesting that Derek sent me a msg last night with pix of an "Assassin" that Roger Hinds does (or has done in the past. They're along the same lines with a planshape that harkens back to circa 1970, somewhere along the lines of MP thinking. Roger is one of the select shapers I respect. He has designed some of the best blanks for funshapes & eggs for U.S. Blanks. I use the "H" series on a regular basis for handshaped customs.

BF Poster Boy aka Brand Ambassador, Derek Thomas has settled in Nicaragua for the past couple months nixing the grander plan of hooking up with a former Big Wave Aussie legend in Mentawais for a "tube riding clinic" due to the Covid Pandemic. Commercial jetliner flights have been cutback during the current crisis.

The two Double Enders I've done for DT are 6'0" & 6'8". On the 6'0" Derek wanted to try something different so I set it up with a Twin Fin configuration & optional 10" Single Box Center fin box. It can opt as a 2+1 if he is inclined. Derek LOVES twin fins, and that, along with riding it as a Single Fin are his #1 and #2 intentions.

The 6'8" is set up primarily as a Tri Fin. Derek isn't a big aficionado of Quads, albeit he might blow his mind if he was faced with wickedly fast long lined up hard to make sections. Anatomically, quads are faster down the line than a tri fin - it's physics with all that leverage out at the rail. Use a center stringer, a center fin & a rail fin to draw triangulation and its angles compared to a quad's triangulation angle out at the rail and you will understand what I'm talking about. And then you have a Twin Fin, with NO back fin which creates two pivot points: nothing turns quicker rail to rail than a Twin Fin..... very little leverage other than if you create it by making the twin with keels. The longer the base, the faster the board can go, and again, that is the leverage doing its thing.

So with that, here's the two BFDE's that are getting more surf and lovely barrels than anyone else I currently know. If you are envious, I understand. If you are jealous, well, I understand that too. The red deck one is the 6'0". Orange = 6'8".

It looks like they're working. Part of the action shots shown here are from a 34 frame sequence taking by Brian M. Scott of Nica Surf Pix. Props & Gracias Grande. 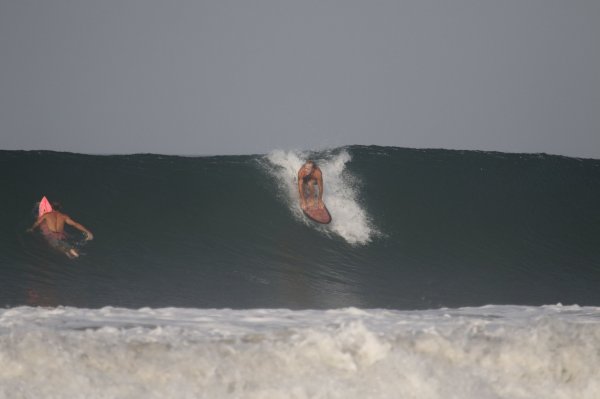 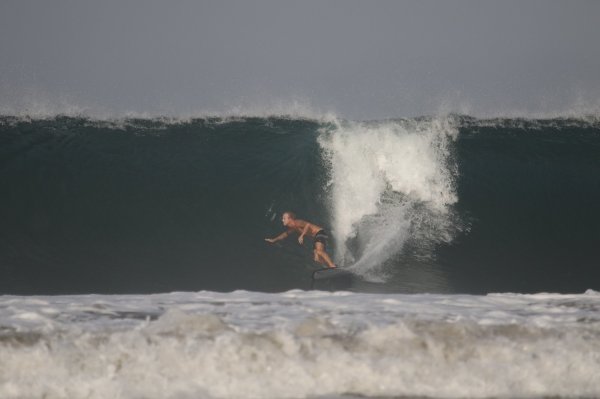 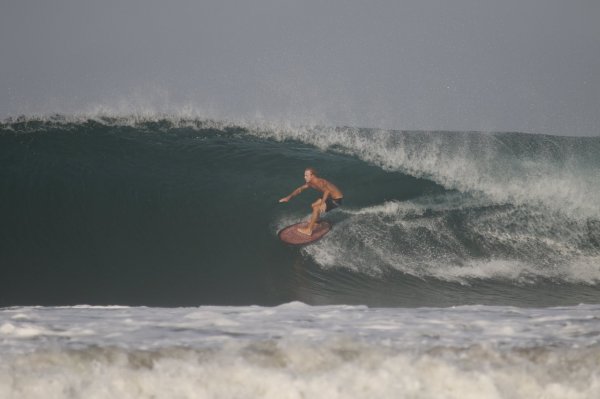 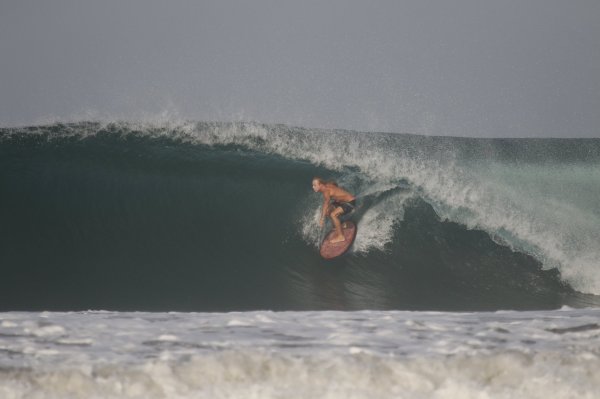 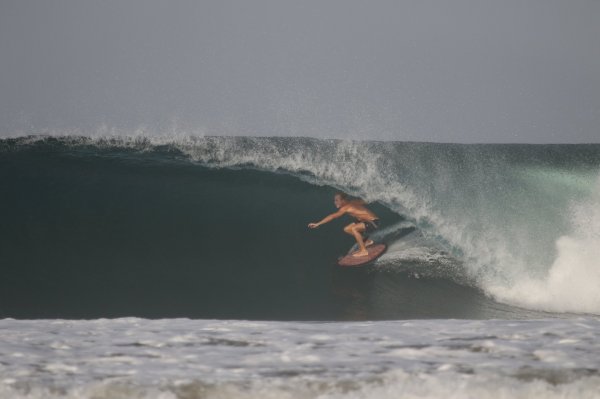 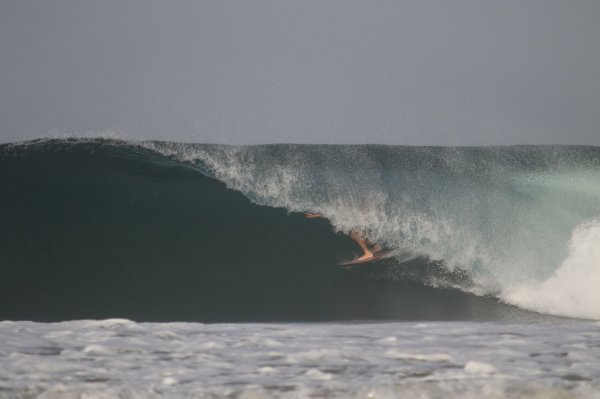 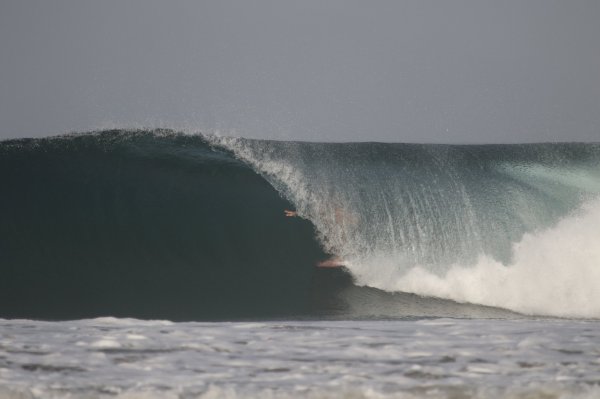 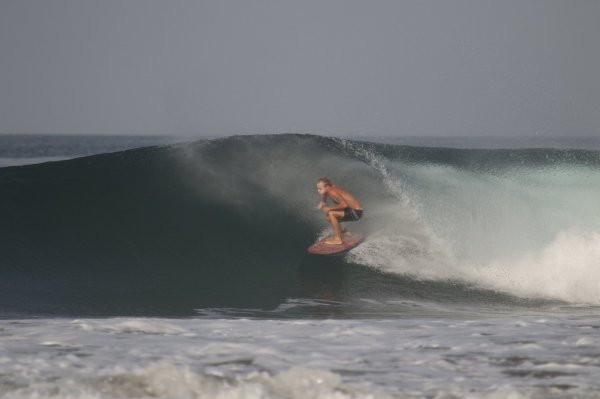 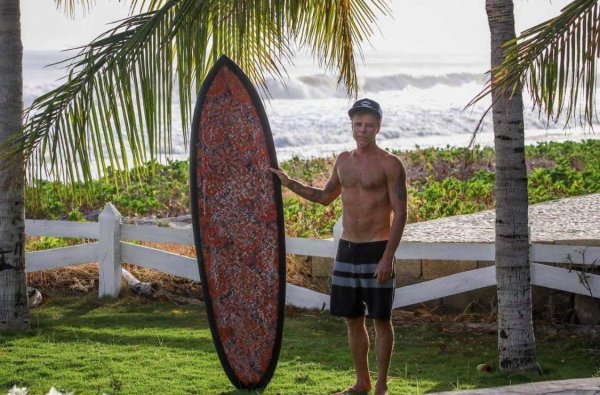 The Roger Hinds Assassin pictured in the previous post has a flip in the tail with down rails. I explained to Derek that the accelerated curve in the last part of the tail coupled with a good pivot fin and sidebiters pushed further forward would net a board that would "Pivot Carve" really well. He was interested in trying something he could really do square bottom turns with.

I told him if the fin is too far back with that type of bottom rocker and tail outline the tail will actually abruptly pop out of the water or hop even though the fin size is correct and it is back where the tail is narrower. The correct placement is with a vertical pivot fin further forward which will allow the board to set the rail deeper into the water while carving square off the bottom. Funny how stuff like that seems to contradict traditional thinking, but that's the way 'rails set' & 'pivot carving' works.

Each surfer hopes to find a good shaper to rider relationship. Ours is fairly new, spanning only a couple years. Time flies so fast, even that kinda blows my mind that it's already been about 2-1/2 years! Derek self admittedly, humbly states he is not good at articulating what he wants in a design. He says "I see stuff that appeals to me, and it's really cool I can throw it to you for your thoughts & comments".

Each relationship I develop with a customer is as custom as the boards we work out together. To me, this experience is worth more than all the money in the world... it's the journey we take, not the destination.

I tell him, I'm not like a lot of other shapers I've met or know that get their nose out of joint over it. For me to continue progressing as a career shaper, I have to be open to new ideas, be a "dry sponge" willing to soak up new thinking in order to evolve an established design or proposed new one. That's WHY HANDSHAPING REMAINS CRITICALLY IMPORTANT, BECAUSE IT ALLOWS THE CRAFTSMAN TO CREATE SPONTANEOUSLY.

Derek sent over a few pix of a Torren Martin Twin, and I can understand the appeal for him. Torren is a very good surfer that makes classic moves like Derek. They are of the same ilk & caliber of surfer. Torren's channel bottom twins have caught on and are gaining popularity if not a cult following. I have watched his videos and remarked to Dansan that I can see where a board moving thru water has specific limitations (or strong suits) and Torren's design has some limitations in super powerful waves, but he is such a good surfer he knows what his design will do and what it won't do, and he compensates for it while still turning in a super impressive performance.

I told Derek I've made deep 6 channel bottomed boards that I mainly rode in the Channel Islands and at Rincon to a lesser degree. The boards were fast and a pain in the ass to repair back then because they had glassed on fins.

Good surfers, really excellent high level surfers, can shred on anything. They can take a non remarkable surfboard out into the lineup, ride a few waves and know where it will shine and where it will show that it's a dog ready for a big nap.

Anyway, just got a call from a customer that wants to drive north from Malibu, give me a wad a cash for a 6'10" I have on hand and I've gotta take a foto of the deck then get shaping......... be this thread is a little bit different than what you mighta expected. Say hello the new norm. Stay safe and all that crap. This pic is actually a ward coffey copy of the torren twin...
And i would agree...the board needs a certain wave...but fun..
And the pilot does need tp be skilled.watching torren martyns girlfriend surfint rhe same frigid empty waves of iceland on the same board ..us awesome DanSan said:
This pic is actually a ward coffey copy of the torren twin...
And i would agree...the board needs a certain wave...but fun..
And the pilot does need tp be skilled.watching torren martyns girlfriend surfint rhe same frigid empty waves of iceland on the same board ..us awesome
Click to expand...

Yellow is awesome
A

Bruce how long would you Build a double ended?

Artz said:
Bruce how long would you Build a double ended?
Click to expand...