Ideally, this thread will become an archive of our memorable sessions.

Something about the surf today made me think about this session I had in Central America back in ‘93. I was on a thruster. ( thruster is such a ridiculous adjective/noun ) .

Anyway. I was sharing a hut with a few buddies. I woke up kinda late. The previous night involved libations and females.

I tried to kick my buddies up to surf. No luck.

I grabbed my board and walked 2 km to the river mouth. It looked fun. Glassy. No one out. Peeling rights. Hot. Mid day tropics.

Something compelled me to paddle across the river and walk down to this spot where a rock sat out beyond the waves a bit. It seemed less of a walk than it ended up being. When I finally arrived, I was shocked.

It was this perfect right handed barrel that peaked beyond the rock, and peeled all the way to dry sand. Over and over and over. It maintained its shape and form for the entire duration. I’m not sure how long it was. It wasn’t a leg burner, yet it wasn’t short.

No man made objects as far as the eye can see (other than my board and trunks).

I paddle out and proceed to have what must be a session at Kelly’s pool.

I learned so much about the board I was surfing.

You’d correct the thing on the next wave.

No camera, no person saw any of it.

After countless perfect barrels, airs, spinny thingies... I went in to the beach and laid down on the sand at the jungles edge and took a nap.

I was awoken to hear my buddy screaming. He saw me across the river sleeping and paddled over. When he got near me he saw how good it was and flipped the fuck out.

He thought I was nuts for not being out in the water.


Shit like that makes you question what surfing is.

I think surfing in nature is appealing due to it’s variance.

You cherish the moments you score.

There I was, totally in nature. Yet it seriously felt like I was experiencing a machine. Due to the consistent frequency and form.

PNW between here and there

been dozens, three do stand out, all pre-Surfline forecast b.s...

-first session ever at G-Land, crack of dawn paddle out with an Australian who became and remains a friend to this day. New swell, few feet overhead, absolute down the reef perfection for an hour before anyone else paddled out, the very first wave absolutely mind blowing.

-mid week early am rolled into Playa Negro to find it as good as I'd ever seen it, not a vehicle or surfer in sight. Surfed all morning by myself until another surfer finally joined me, our host Doug from the just opened Hotel Iguanazul, where my wife and I were literally the hote's first guests.

-a dense foggy mid week September when we (3 best friends) launched off the pier and headed north into the Ranch, visibility under 25 yards. Slow cruise staying just outside the kelp bed when we suddenly emerged into a large sunny doughtnut hole, just up ahead Coho spinning SH-HH glass cylinders from Cockroaches all the way through the inside. The doughnut hole stayed open, the dense fog remained on the beach, and we surfed absolute spinners without a stroked yell in case anyone was parked on the beach waiting for the fog to lift. Three hella fun hours and a coupla dozen waves apiece later the wind finally picked up enough to lift the fog and the cars and boats began to roll up. The grins were breaking our cheeks on the ride back.

Early 70’s, living on Maui. Native drums started sounding about a big swell and that Maalaea might be breaking. Me and some buddies made the drive around to check it out. Looked in awe as we saw it way overhead and just reeling, with wind howling offshore. Decided to paddle and and give it a go. Wave was just freight training down the line without a section, just perfect. Took of on wave after wave and tried to outrun it. Took off, steep drop, set your line (single fins), and off to the races. Next thing you know, you were right in pocket, next thing looking out of the tube, then getting absolutely worked. Tried time and time again to make a wave and never did. Never saw anyone else make one either, just too fast and perfect. Epic day, lodged in my memory bank.
Last edited: Aug 7, 2021
J

Surfnfish said:
-a dense foggy mid week September when we (3 best friends) launched off the pier and headed north into the Ranch, visibility under 25 yards. Slow cruise staying just outside the kelp bed when we suddenly emerged into a large sunny doughtnut hole, just up ahead Coho spinning SH-HH glass cylinders from Cockroaches all the way through the inside. The doughnut hole stayed open, the dense fog remained on the beach, and we surfed absolute spinners without a stroked yell in case anyone was parked on the beach waiting for the fog to lift. Three hella fun hours and a coupla dozen waves apiece later the wind finally picked up enough to lift the fog and the cars and boats began to roll up. The grins were breaking our cheeks on the ride back.
Click to expand...

i have a cojo story too. but as hike in from the west end of the hollister ranch. i will tell it but first...

what year did your donut hole score take place?

surfed the ranch regularly as a drivein 79-84. at that time the bixby ranch was leased to air force and cojo drive ins were verboten

Surfnfish’s fog story reminded me of a late summer day a few years ago. Seniorgrom and I walked out to a fav spot in pea soup fog. Could not see 20 yards in front of you thick. We thought, “what the hell, report looked promising, let’s paddle out”. Finally got out to the line up to find 8-10 others sharing perfect waist to shoulder peelers. Super cool vibe with hoots and laughs all over. Our secret that day. Surfed for quite a while and I started to think about where we were as you could not see the beach and this spot has notorious currents. The end of the session, paddled in and expected to be a long walk from the car only to find we were at damn near the same spot we paddled out from. Was an epic memory day all around.

oh lordy, where to begin?

Two of my best sessions ever:

- Casino Pier, Northside (pre-Sandy when there was a proper pier and an actual northside): April 30, 2005, only a memorable date because it was the last day of no parking meter enforcement. About 4-6' sets, offshore winds, endless rights, open faces for turning, and utter perfection. It is normally a very crowded spot, but that day was just me and one other guy. Where the heck was everyone? We traded waves for 4 hours with a perfect rotation -- he'd be paddling back out as I'd be dropping in, and vice versa. Absolutely as good as it gets. I was so stoked that I talked a girl I knew into going back with me the next day -- she was going to operate my video camera and capture the magic for me so I could dazzle everyone with a surf video for the ages. Well folks, the sea is a fickle mistress -- it turned out to be a totally different ocean with the lousiest waves I've ever seen. I surfed like a complete kook and made a damn fool of myself. The video can be summed up by this one kooktacular frame grab. No wonder she never spoke to me again: 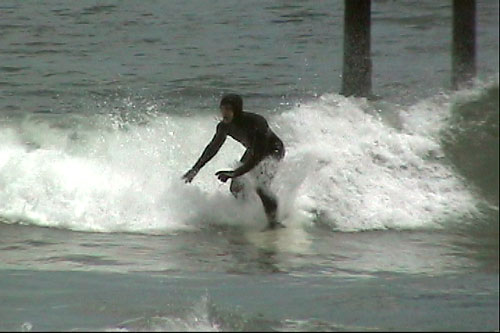 - Casino Pier bathhouse (a block or two north of the above spot): I went over to the beach after work with a coworker one day later that fall. It started out as just moderately good for longboarding, just soft high tide waves. We surfed for maybe two hours like that. All of a sudden, everything changed instantly. I guess the tide hit the sweet spot, and it was suddenly a playground of absolutely perfect thin-lipped barrels. Of course a ton of other guys flocked to surf, but it didn't matter because it was spread out and every wave was identical. Never before or after have I had so much success getting tubed. The key that day was to straighten out to let the wave wall up, and then hook in with a sharp bottom turn and tuck in for the dry view... and repeat as many times as the wave would allow. It was the one day that I've ever had multiple tubes on one wave, and if memory serves correctly I even got tubed three times on one particular wave. Hungry? Thirsty? How can you pull yourself away from a session like that? I surfed for 4+ hours straight and was so famished and dehydrated by the end that I thought for sure I would die before I could complete the trek across the beach to my car. I kind of regretted everything at that point, but also regretted absolutely nothing. My best day of surfing ever. 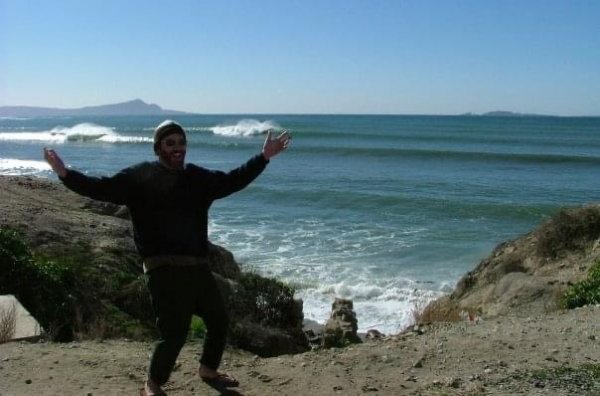 You must log in or register to reply here.

Swaylocks has moved to Discord

The magical session / Days where you can not surf wrong