Bruce Fowler said:
"Would the BFV8 have the same characteristics if it were lighter?"

Weight doesn't change the Physics going on with the Design............ with ANY design.

The Dynamics that a Surfboard experiences is consistent to that Design while the Perception of the Ride is experienced by the Rider.
Of course, a much lighter board will feel more responsive most likely becuz the exertion of weight from the rider is more acutely 'felt' by the board as it is being navigated. So the Rider would say,

"the lighter version is easier to turn".

"I like the heavier version because it has more Glide & Carries more Momentum thru dead spots."

In this sense, both Riders assertions are valid, but the Design stays True as to whether it Goes to Rail Well, has Blazing Straight Line Trim Speed,
and Paddles Well and offers early Entry........ albeit, a super light version WILL Pop Up & also Drop Off a Plane quicker.
Click to expand...

Thank you for that Bruce. I appreciate your expertise in this matter. The newest heavy water quads are here. Designed by surfboard builder, craftsman and big wave charger Danny Hess, the Noriega Quad set ticks all the boxes when it comes to being well-equipped for the big stuff. The large sized front fin combined with the complimentary area distribution of the...

I didn't mind controllers in mine.

NVM's.... sister ship to V Machine aka Plain Jane........... the New Machine became a 2nd generation V Machine...... I crossed over what I learned from the V8 and married it to the classic SVM resulting in the NVM, a much more foiled tail section & twice the panel v of the original SVM. The nose rocker got lifted one inch in the last 12" of the board with a "flip tip" giving the NVM's more forgiveness on late takeoffs & re-entries. All of them are still available.... no need to discard...... evolve & offer variety.... why not?

Hey Bruce, I vaguely remember you working on soft tops. Are those still happening and are the V8s gonna be one of the models?

nineohtoo said:
Hey Bruce, I vaguely remember you working on soft tops. Are those still happening and are the V8s gonna be one of the models?
Click to expand...

The first limited edition of Premium soft tops were 6'0", 6'6" & 7'6" off the original V Machine matrix. Of those three the 6'6" has the 3-4-5 fin option, all in Futures. All of them are built like any custom EPS Epoxy surfboard with American materials other than the EVA decking which is a high grade product from China.

The BFV8 was/is still on the drawing board but what happened after ordering 60 of the aforementioned, we got hit with HUGE price increases for the container that Randy @ Wavefront & I shared. The cost escalated from $2k to $12k almost overnight. Add to that the increased prices for handling once they hit San Pedro. The State of CA got in on it too, hiking duty for imports.

I tabled reordering any more v machines or V8's from Clyde Beatty (who builds them for me) until things get more realistic. There's simply no margin for me
to be interested in this offering for the time being. I have existing inventory in the V Machines & can ship them globally, but for now the brakes are on for more units.

Everything I'm building is American made while helping support other craftsman I know and admire. 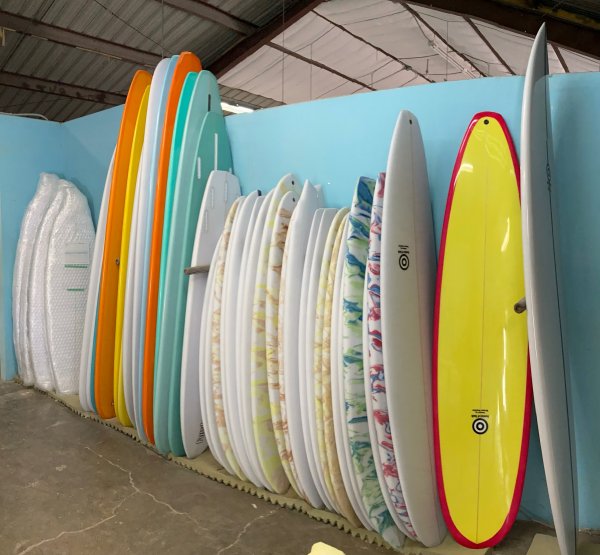 That's a bummer to hear they did you dirty like that. I understand the slight increases in everything worldwide, but a six times increase is outrageous. Hoping that turns around, as the idea of a soft top V8 sounds rad.

It will happen but when it makes sense. I suppose I can sell a lot of 8 ft. "Team Models" in that build, even the longer ones..... food for thought.
This is a Team Model. It is a semi classic longboard meaning a softer front end with modern design elements in the tail. Neutral bottom, no concave although I've added flow thru or step decks per customer preference. TYpical dims: 7'6"x21-1/2"x3"x54L and 8'0"x22"x3"x62L. I just did a group from 9'0" thru 10'0" that I will post soon. Resin Tints & Clear as seen in the previous post. Some abstracts in production too. 10'0" & 9'8". 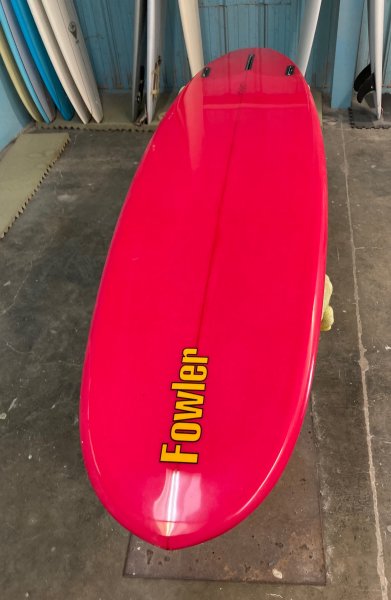