Not a lot of discussion on here in regards to 2+1's so i thought we could start a discussion and pic thread.. Who's on 2+1's and what are you riding?? Rails, fin set ups, volume, glassing, etc.....
Nothing for me yet... but considering giving one a try.....

Great timing on this. I have not ridden a 2+1 in probably 10 years. I just ordered one from Ole when i was on Maui last month. I asked that the last third of the board have a hard enough edge in case i want to ride it as a single. Ole has been shaping for a long time, so i felt comfortable that he will be able to make that board work. Can't wait to get it.

I was referring to a LB specifically.

i had a 6'3" wayne lynch evo 2+1 (widowmaker) that was sensational. real lively thumbtail that handled waist to overhead beachbreak/sandbar very nicely. can't remember the width or thickness but couldn't have been more than 2.375". it paddled well and i was 6' and 215lbs then. 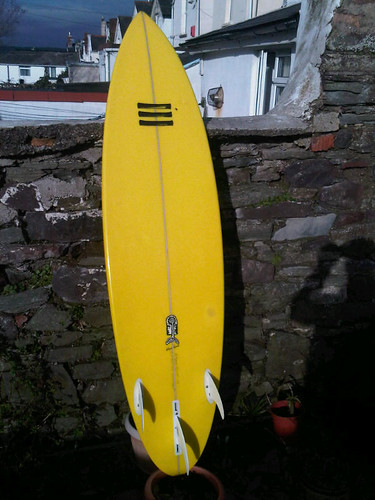 I like them only slightly better than I like thrusters. Which is to say, not much at all.

I can see bites on a steep wave for... well... bite. But I find them annoying. More drag, I tend to catch a rail easier, they take away from the flow of a single fin (probably part of the point)

Only place I can see a use for them in my quiver would be if I lived in Hawaii or some such joint that has powerful steep waves where hold and a sharper pivot would be helpful. On longboards.

On shorter boards (8-6 and shorter) I would rather have a quad plus one. Ride it single 75% of the time and go quad for steeper, more powerful waves with the option of adding a stubby center fin using FCS' box adapter. Matter of fact, I like quad longboards over 2+1s any day of the week.

So, I've now managed to talk myself out of the argument that there is a place for one in my quiver. I suppose if I were renting a board and that's all there was... Or if I were a big pop-out aficionado where there wasn't a choice...

I have a 6'6" Parmenter 2+1. Channel bottom MP disc like the MPEgg on this page http://www.nowtro.com/nowtro-boards/

I had a regret selling a 2+1 pintail Christenson that had "HPNR" on the stringer. He doesn't seem to make that model anymore.

I think for longboards, a smaller (under 9'6" and thin), 2+1 can be fun. I wouldn't custom order one or spend a ton of money on one, but it is a good addition to a quiver. A lively rider if you surf windblown crap.

a quiet cabin in the woods

Currently have both 9'0 and 8'0 RP hplb's in the quiver, and boards are used a bunch.
The 9' is set up with fronts at 16", main box allows main fin front to sit right behind trailing edges of fronts. This forward fin positioning along with the RP really shortens up the rail line, allows the board to be turned from well forward when desired. Single to double concaves, continual rocker with some extra tail lift, low performance rails. The 8' is a smaller clone. Both board are Hella fun with range from smaller to we'll overhead. Both boards also are 5 fins, with quads in down the line speedsters.

owned an 8'6" Walden Magic 2+1 - learned on it, was fun, but also kind of a piece of junk. Probably too much rocker and pushed some water
owned 3 different Zeph Fade to Black 2+1 - loved the 9' ers but anything over seemed to lose it's liveliness, at least for me. Great travel board cause it would surf knee high to double overhead.
i own and surf several single fins and enjoy that as well but it's just...different. One of the biggest things for me is that it's much easier to make mid wave adjustments on a 2+1 and to also surf closer to the center of the board. Singles, especially old school riders, take a little more planning in how to surf the wave and required smoother movements to maintain your flow.
i've got an HPNR 2+1 from Jim Phillips on order right now in epoxy

Doodle approved 6'10 Howard special mini now with a 6" Wayne rich power centre fin. SUCH a beautiful board to look at and surf. Super smooth and swoopy. Roll into panel vee, fairly down rail all around, softer up front harder but not razor sharp by the fins.

I like the way the side bites let you carry more speed through the apex of a cutback, singles often feel like they lose speed through a turn which is fine in a wave that's giving a lot already.